„My Hotel in Dresden“

„My Hotel in Dresden“

You like to learn more about the counts von Luckner?

A brochure can be obtained at our hotel!

We gladly have it sent home to you as well.

and their castle Altfranken near Dresden 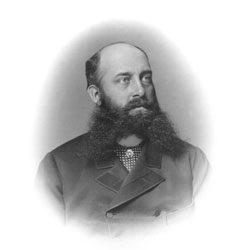 High above Dresden, The Luckner Park with its 150-year-old trees comprises a landscape, steeped in history. The guests of the KIM HOTEL IM PARK can still detect its charm today, since the Luckner Park, which nowadays surrounds our hotel, is the former castle garden of the castle Altfranken (Old Franconia) of the counts von Luckner.

The counts' history is full of changing fortunes and big tragedies. The castle Altfranken played its part within these stories as well. In 1836, Heinrich Wilhelm Graf von Luckner (1805-1865) married Amalie Wilhelmine countess von Reichenbach-Lessonitz (1816-1858). But already a year after the birth of their son Arthur in 1838 in Baden-Baden, the couple broke up and got divorced.

Countess Amalie von Luckner re-married after the divorce and acquired the manor Altfranken near Dresden in 1841 from the cavalry captain Moritz von Wolfersdorff. As her new husband died, the widow married the said Count von Luckner for the second time in 1847. In 1849, she gave birth to their second son Alfred Felix in Dresden.

In the following year, the construction of the castle Altfranken began according to plans of the architect Alexander von Heideloff from Nuremberg. The construction work continued to the year 1852. But in 1858, Amalie countess von Luckner died and was buried as the first family member in the family tomb on the graveyard in Pesterwitz.

As his first son Arthur died as well in 1864 after he had been married to the actress Elisabeth Höck for two years, the count lost all interest in life. On February 19th 1865 he shot himself in the castle Altfranken.

His second son Alfred Felix inherited the castle and married the principal dancer of the court opera house of Dresden Mathilde Zink here in 1886. Their son Nikolaus Felix (1884-1957) chose to settle in Baden-Baden and sold the castle in 1938 to the Nazis who had it torn down.

In 1990, the Kimmerle-family acquired the area and built the KIM HOTEL IM PARK here, while including the few remains of the former castle wall into construction.

Movie Nights of the River Elbe 2022

Other Websites of the Kimmerle Group:

The Kimmerle Company - Career on HOTEL-DRESDEN-BUCHEN.COM